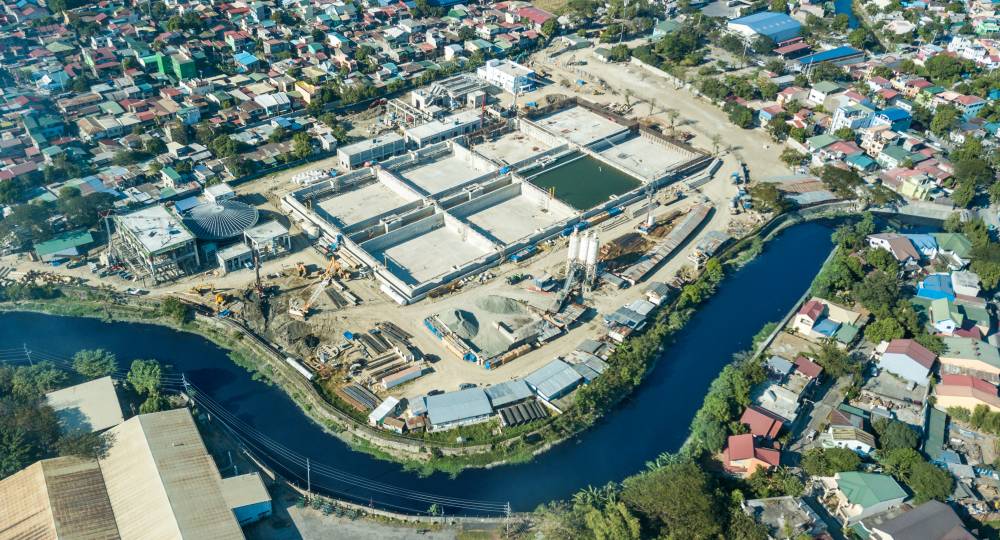 The Ilugin Sewage Treatment Plant (above) will serve the sub-catchment area of North and South Pasig, covering communities in and around Pasig City. The 100-MLD capacity STP and its sewerage system will serve close to 700,000 in terms of population once completed. The STP is expected to be operational by 2020.

Manila Water will spend P115 billion more to complete its sewerage program by 2037.

"Since 1997 when we took over the East Zone, we have spent P38.5 billion on our wastewater programs from collections of only P36.9 billion. So, we have excess investments of P1.6 billion and we expect this trend to continue," said Manila Water Chief Operating Officer Abelardo P. Basilio.

To complete its sewerage program until 2037, the company needs to lay about 500 kilometers more of pipes in public and private roads. This will capture wastewater from households and establishments in the East Zone to convey to sewage treatment plants to ensure that wastewater released to Manila Bay complies pollution control standards.

Part of the expenditure will fund the construction of system projects covering eleven (11) sub-catchment areas. These projects will be implemented in two or three phases. Seven (7) projects are set to commence until 2022 translating to an investment of Php 38.4-billion, while the rest will begin construction from 2023 onwards. The sewage treatment plants (STPs) to be built for these system projects are designed to cumulatively collect and treat up to almost 950 million liters per day (MLD) of wastewater from 7.5 million population in the East Zone by 2037.

The investment also covers the rehabilitation of existing sewer lines and the upgrade of currently operating STPs to comply with the recently released DAO 2016-8 standards by the DENR for biological nutrient removal in the wastewater treatment process.

For ongoing wastewater infrastructure projects, nearing its completion is the Ilugin Sewage Treatment Plant to serve the sub-catchment area of North and South Pasig, covering communities in and around Pasig City. The 100-MLD capacity STP and its sewerage system will serve close to 700,000 in terms of population once completed. The STP is expected to be operational by 2020. More system projects are ready to commence soon. These include the Mandaluyong West and San Mateo-Rodriguez sewerage system projects, which will eventually serve more than 1.3 million population by 2037.

"For most cases, Manila Water also acquires the land where the STPs are put up. Among the Metro Manila governments, Marikina is way ahead with an 80 percent coverage all spent for by Manila Water, and Mayor Marcy Teodoro wants 100-percent sewerage in the next two years. We will do that and that will make Marikina our model," Basilio said.

Pasig Mayor Vico Sotto also wants to fast-track the city's sewerage projects and "we are working closely with him because we have the same objectives of making sure that only treated water is released to Manila Bay", Basilio added.

To date, Manila Water operates 38 STPs and 2 septage treatment plants with a total capacity of 310 MLD.