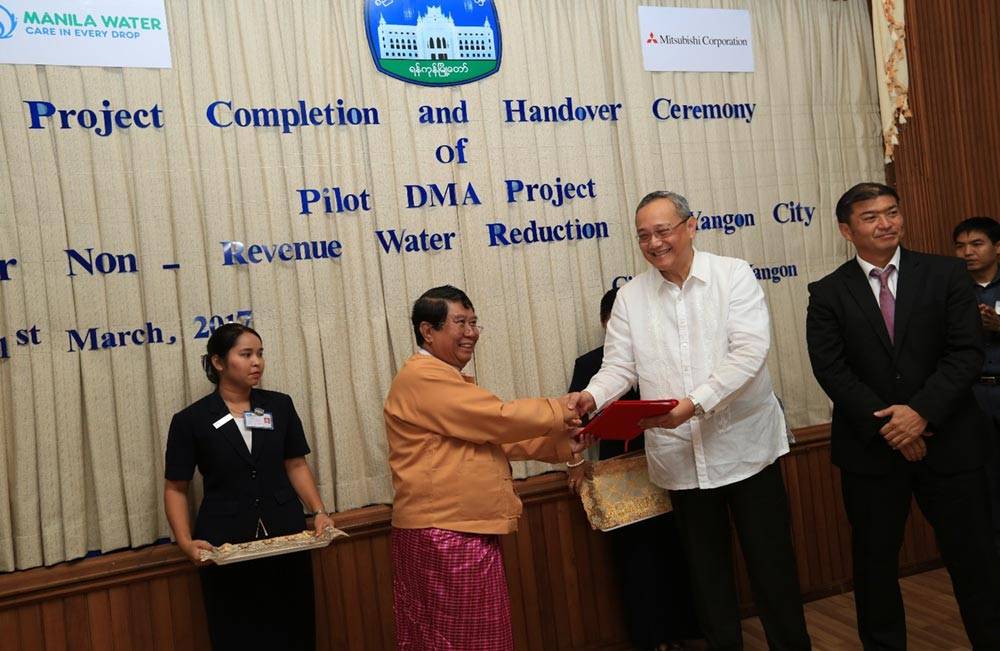 Manila Water has successfully completed its pilot project in Yangon City in Myanmar, significantly reducing levels of water system loss from more than 54 percent to 14 percent. In partnership with Mitsubishi Corporation and Yangon City Development Committee, the leading water service provider has fulfilled its promise to demonstrate its technical capabilities undertaking a pilot project and improving the water ways in selected areas.

The pilot project, conducted in the townships of Insein and South Okkalapa in Yangon, included the formation of district metering areas, technical and non-technical surveys, system loss or non-revenue water (NRW) reduction and management, among others. NRW in Htan Pin Gone in Insein Township was reduced to 17.32 percent in August last year from 52 percent in March. Similar leak reduction efforts in South Okkalapa Township resulted in a decreased NRW level of 12.19 percent by November 2016 from the initial 57 percent.

Water recovered was brought back in the system, increasing water pressure by 2 psi and improving access to water supply of the estimated 4,000 residents of the project areas. Registered billed volume has doubled with the replacement of water meters, increasing revenues for the Yangon City Development Committee (YCDC), the administrative body responsible for water management in Yangon City.

According to Manila Water Asia Pacific President and CEO Virgilio C. Rivera, Jr., the pilot program demonstrates that the company has the understanding, expertise and experience to support YCDC to deliver sustainable water services. “We are excited to note that YCDC, under the leadership of H.E. U Maung Maung Soe, is interested in co-developing a plan under PPP to address further reduction of non-revenue water on a larger scale and deliver piped potable water supply at reasonable cost to the public,” shared Rivera.

The pilot project is part of the Memorandum of Understanding signed by Manila Water and Mitsubishi Corporation together with YCDC in 2014 to address the needs of the city’s water system.

Manila Water has been very successful in resolving similar challenges locally. Apart from providing clean and potable water to customers 24/7 by rehabilitating an old water system of a densely populated city, the company has successfully reduced eastern Metro Manila’s system loss to 11% from a high of 63% during the start of the concession period. Since then, it has assisted and reformed water systems across the country through its operations in Laguna, Boracay, Clark, Cebu, Davao del Norte and Zamboanga under the Manila Water Philippine Ventures subsidiary.

With presence in Vietnam, Indonesia, and Myanmar, the company brings its technical capabilities, experience, and expertise to geographies outside the Philippines through subsidiary Manila Water Asia Pacific.